Over six million viewers tuned in to BBC1’s CountryFile on Sunday (24 July) to see what was happening at Taunton Chamber members Queen’s College.

Adam Henson, the BBC CountryFile presenter and farmer from the award-winning Cotswold Farm Park showcased the opportunities available to pupils at Queen’s College in Taunton to learn about how to grow and rear food. To top it all off, celebrity Chef, Michael Caines MBE who has two Michelin stars, taught pupils how to prepare and cook up the food in the school’s kitchen classrooms.

The opportunity arose following a meeting between award winning Head of Food and Nutrition at Queen’s College, Joe Mann and his team, and CountryFile presenter Adam Henson at the 2022 “Eat Game” Awards in London.

Mr Mann, who was named ‘Best Teacher in England’ by the British Nutrition Foundation in their 2020 Education Awards for championing Food and Nutrition told Adam Henson about his field-to-fork approach to teaching at Queen’s. He explained how he wanted to get some school pigs to educate his students about where their food comes from, in conjunction with his productive kitchen garden that is already located on the school site.

Adam agreed to provide the pigs and to film it as a segment for BBC’s CountryFile.

The first segment opened with Adam rounding up two lively 10-week-old Berkshire piglets to sell to Joe Mann, before showing ta small group of Queen’s students taking delivery at them at their new home in Somerset. The young male pigs, called ‘George’ and ‘Percy’ will be looked after over the holidays by two of the Queen’s College younger Prep pupils Ben and Isabelle.

Joe Mann said, “There is a lot of disconnect about where food comes from, and my aim is to address this in my role at Queen’s College. Students at Queen’s already grow their own produce in the school’s vegetable garden, but I also want them to understand where meat comes from and how animals are responsibly reared.”

The film crew then moved to the school’s vegetable garden where pupils were harvesting some home-grown onions and garlic. BBC CountryFile showcased the growing and harvesting of a selection of organic fruit and vegetables that pupils had grown over the year. They then cut to a surprise visit from South West Michelin-starred celebrity chef Michael Caines MBE followed by a VIP Cooking Masterclass.

Michael Caines said, “Congratulations to Joe Mann (Head of Food and Nutrition) and the team at Queen’s College and not forgetting the pupils who were amazing. I was pleased to be asked to visit the school and to get involved to help inspire the children. This was a great platform for all the great work done and achieved at Queen’s College in food teaching”.

If you missed CountryFile on Sunday, or want to watch it again, you can use this BBC link: 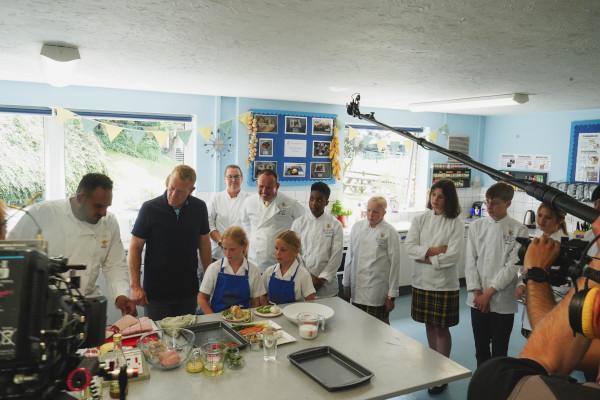