I had the recent pleasure of meeting 8 year old Somerset Speedway star Oliver Bovingdon from Puriton, who had brought his race bikes to the premises of our Taunton Chamber member business Cleaning Solutions UK. Owner Richard Williams is one of Oliver’s proud sponsors – but more about that later.

Oliver may be small in stature, and young in age but he very confidently explained his role in the speedway world and the different bikes he had brought with him. The first is a Grass Track bike that he began riding aged 6, but his absolute pride and joy is the newer Speedway bike that he also competes on. Oliver was keen to explain that you need to be 8 years old to compete, and that he was ‘desperate’ to make a start. And what a start he has made! Oliver competes in the 8 – 13 age group, and despite stiff competition from taller rivals, often on much bigger bikes, Oliver has twice made the podium in the British Finals – although he was quick to inform me that the two 3rd place finishes he has achieved are ‘just the start’.

Oliver’s home club is Bridgwater and District Motor Club. The club are incredibly supportive of their young star, and Oliver was delighted to point out the club logo
emblazoned on both his bike and his safety suit. Indeed, he went on to tell me that the face masks that have been recently ordered to comply with likely covid regulations will also feature the club crest. Expanding his horizons, Oliver was thrilled to recently be named as the 2020 mascot for the Somerset Rebels – our County team who compete in the British Speedway Championship. This gives Oliver the opportunity for weekly track practice and to ride out at the start of each race meet, and with previous team mascots making good progression in Speedway, Oliver is very much focused on following in their footsteps.

A further highlight in Oliver’s Speedway career has been the British Young Lions Speedway training camps that he has been invited to. British Young Lions are the youth ‘Team GB’ of Speedway and, investing heavily in the future stars of the sport, the training camps include media training and nutritional advice as well as the opportunity to meet other young riders and improve key skills. As a lover of good marketing, I had wondered where Oliver’s confident interview skills came from, and on enquiring further Oliver explained that he has been putting his media training to good use at as a member of the School Council at Puriton Primary, where he is often asked to stand and speak in assembly.

Oliver and his father Chris are keen explain that none of the above would be possible without the sponsorship that he so generously receives. Beyond the family members that are named on his bikes and safety suit, Oliver’s kit displays the branding of numerous businesses, including Cleaning Solutions UK, which he is very fortunate to have the backing of. Sponsors kindly offer support in the form of financial assistance, help with equipment and bike maintenance, and Oliver says a big part of his confidence on race days comes from knowing that his sponsors are behind him all the way, on each and every outing.

Taunton Chamber of Commerce join ‘Team Bovingdon’ in wishing Oliver much success in his Speedway career – it was a real pleasure to meet him and hear him talk so passionately about his sport and his goals for the future. If you would like more information or would like to become involved with Team Bovingdon please feel free to contact Oliver’s father Chris at [email protected] or [email protected] 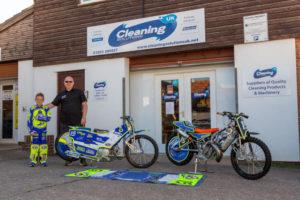