Leading law firm cycles 200km around Somerset and Dorset, raising over £5,000 for RNLI 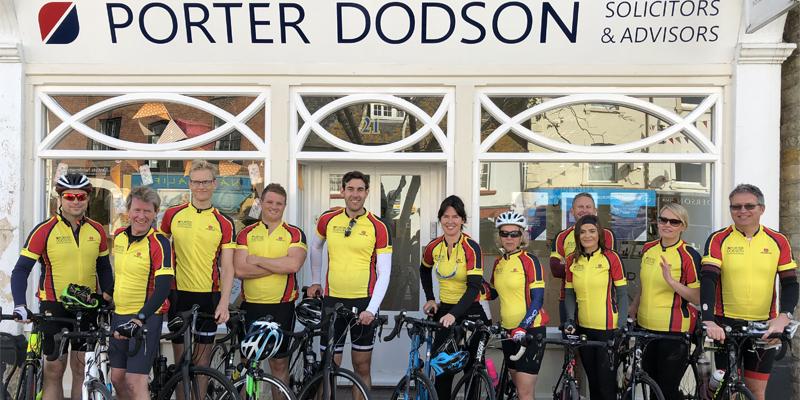 Sometimes a challenge can seem unattainable, but Porter Dodson’s riders were determined not to let this one beat them!  Led by experienced riders, Stephen Wray and Phil Stocker, both of whom have completed Land’s End – John O’ Groats (LEJOG), their team of 11 colleagues – ranging in age from 27 to 60 – were nervously chomping at the bit when they set out from the firm’s Wellington office in the dark at 6:20am on Thursday 5th September.

Their goal? To cycle almost 200 kilometres around Somerset and Dorset in a day, visiting each of the Firm’s nine locations, to raise money for the RNLI. Their target was £3,000, so they were delighted when their final total weighed in at well over £5,000. Apart from the two leaders and one other experienced cyclist, none of the riders had completed more than half of the planned distance in a day before they started training.

Conditions were good and the team arrived at the firm’s Bridport office earlier than expected, where the Bridport News was waiting with local businesses to see them complete the first leg of their ride. After a brief pit-stop to refuel (there was cake aplenty!) the cyclists set off for Poundbury, where friends, family and colleagues were waiting excitedly as if expecting a royal visit!

Dorchester and Sturminster Newton were quickly crossed off the list, with an on-time arrival of 4:30pm at the Sherborne office, where a welcoming committee waited expectantly in front of the Abbey.  By this time, muscles were aching and a few were questioning the sanity of the team – including some of the riders themselves!  Fortunately, Dave Hooper of Synergy Sport and Remedial Massage Therapy was on hand to give massages and ensure everyone was fit to continue, riding with them to motivate them for the remainder of the route.

Onwards to Yeovil, where crowds of co-workers stood outside both offices to welcome the riders.  Being one of the larger offices, Yeovil staff had organised a bake-off style cake sale and a static bike ride to show their support. Several of the riders commented that the welcome was like finishing a stage of the Tour de France!

With just the final stage to get under their belts, the riders set off for Taunton, arriving triumphant at 8pm, where several of the firm’s partners served them much-needed refreshments and a glass of sparkling wine to celebrate their accomplishment.

Laura Roper, who only took up riding in 2018, told us “I feel very fortunate to have had the opportunity to take part in this fundraising ride. It was one of the greatest challenges I have ever undertaken but completing it was incredibly rewarding.  There were times when I wasn’t sure if I was going to make it the whole way round, but the amazing support from colleagues at all the Firm’s offices was a great boost for morale”

Finance Partner, Nicholas Clegg, who first suggested the ride and drove the leading support vehicle, said “We are proud to have such dedicated members of staff, who have given up their weekends and evenings to train for this remarkable challenge.  We are very relieved that everyone completed the day and there were no injuries or mechanical failures. The support shown by staff and local businesses at every office was overwhelming.”

Philanthropy Manager at the RNLI, Steve Law, praised the riders for their support: “My sincere thanks to those that rode as part of the charity cycle raising a fantastic amount that will be put to good use on the coasts. The RNLI is made possible thanks to people like the Porter Dodson staff who generously give their time as well as those who kindly give their money to sponsor them. My thanks also to the company for supporting their team with fundraising and thus the vision to end drowning, it means a lot to us and all those who risk their lives at sea.”

Riders will be visiting the RNLI College in Poole on 1st November for a tour of the college and cheque presentation.

For anyone wishing to donate, the team’s fundraising page will be open until the end of the year and can be accessed via Porter Dodson’s website.

Any cookies that may not be particularly necessary for the website to function and is used specifically to collect user personal data via analytics, ads, other embedded contents are termed as non-necessary cookies. It is mandatory to procure user consent prior to running these cookies on your website.