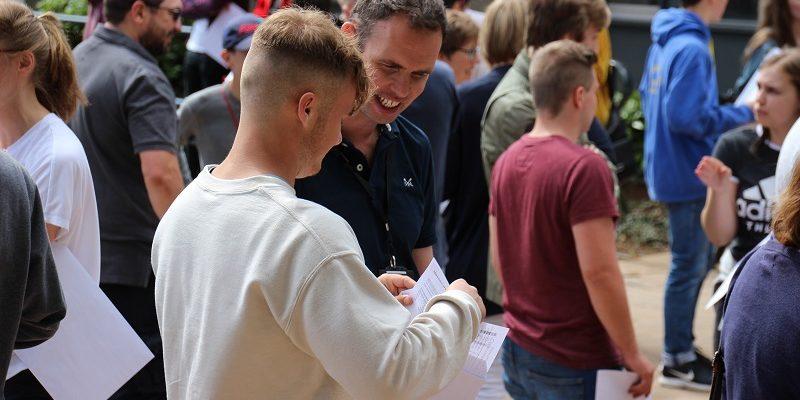 In an extraordinary year, Richard Huish College will be congratulating all their students’ achievements as they virtually collect A Level and Vocational results today.

This year has been like no other with the whole exam series being cancelled and students instead being awarded Centre Assessed Grades (CAGs) by their centre, which have been nationally standardised by exams boards using statistical modelling developed with Ofqual, to produce final results.

In a survey conducted by the Sixth Form Colleges Association (SFCA) on 12th August, of which Huish are members, data shows very clearly that something has gone wrong and that this year’s A Level results in sixth form colleges do not reflect either their CAGs, or their three-year trends, a key objective of this year’s process. Bill Watkin, Chief Executive of Sixth Form Colleges Association said, “There is a huge discrepancy between the teacher-led CAGs and the exam board algorithm-led calculated grades, showing less than 4% of the members that responded felt that their CAGs were in line with their calculated grades. Of the 96% who reported lower than expected grades, over half indicated they were ‘much lower’. This is not a sector lacking in experience or expertise. It is a sector that has consistently been among the highest performing in the country. This is not a problem of over-grading or wholesale blips. This is a clear indication that the statisticians have got it wrong this year.”

Through hard work and commitment to their studies, and continued support and expertise from the dedicated teaching and support staff, Huish students thoroughly deserve the best results. With their final year cut short and the opportunity for students to finish the way they deserved taken away, many will be reflecting on the incredible journey they have been on over the past 2 years where they have developed exponentially and are ready to progress onto the next stage of their future career plans, which college staff are supporting in every way possible.

Despite the exams board decision to downgrade some students results below their CAG, many students have still had fantastic success. The highest achiever was Dak Dakshesh with 5 A*’s for Chemistry, History, Mathematics, Physics and EPQ.

Chief Executive of Richard Huish Education Group, John Abbott said: “Huge congratulations to all of our students who are receiving exam grades this morning, their individual and collective responses to the challenges in the latter part of their education with us has been immensely impressive. As in previous years large numbers of Huish students have received grades this morning that will allow them to progress successfully into either University Education, employment or higher level training. It is deeply upsetting however that it would appear that there are more students in Colleges than ever before, that have been let down by the processes put in place by Ofqual and the exam boards for the awarding of grades without summer examinations. Despite all the commitments and guidance from Ofqual and the exam boards the evidence would suggest that a significant number of our students would have achieved a better grade had they been allowed to sit a summer exam as normal – this cannot be right given what our young people have already been through.  We are working with students, parents, other Sixth Form Colleges and the Sixth Form College Association to ensure that changes are made quickly and at a national level in order to address this fundamental unfairness”.

Emma Fielding, Principal of the College said: “This year group receiving their results today have been fantastic and it has been such a privilege and pleasure to have them with us at Huish. They have shown tremendous resilience over recent months, we are hugely proud of their achievements and will continue to support them in every way we can.

“We are so looking forward to welcoming our new and returning students back in September for a full timetable of lessons, enabling us to fully support their learning journey at Huish”.