Huish College Made in Dagenham

You are here: Home / News / Huish College Made in Dagenham 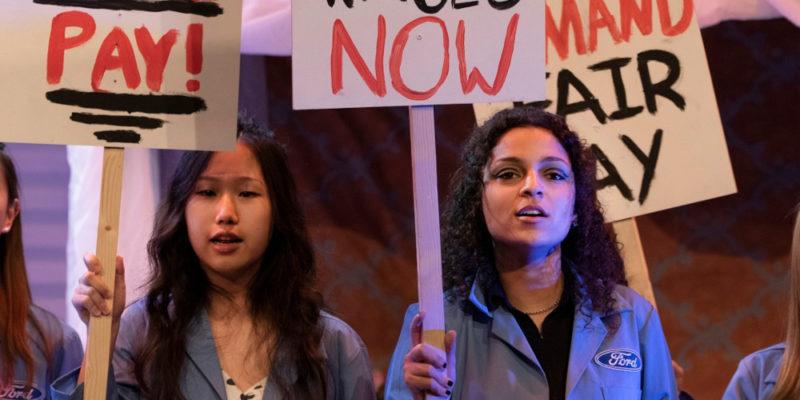 The show must go on, Made in Dagenham goes down a storm in the Redwood Theatre

Richard Huish College students took to the big stage to present the political and comedic musical, ‘Made in Dagenham.’

Following the phenomenal success of 2019’s sold out production of Chicago (High School Edition) at The Brewhouse Theatre, there has been much anticipation for Huish’s next show that would be the first large-scale production to take place in the College’s brand-new Redwood Theatre. Made in Dagenham did not disappoint, spanning 3 nights between 16th- 19th February, the Huish students wowed audiences as they presented the world-famous smash hit.

Made in Dagenham tells the inspiring story of the female machinists of the UK Ford factory who went on strike in 1968 to demand equal pay. Based upon real events, the creative tale introduces you to character Rita O’Grady, a factory worker whose life is changed forever when it is announced the girls in the stitching room of Ford’s Dagenham River Plant will have their pay grade dropped to ‘unskilled’. Quickly drawing on a strength she never knew she had, she leads her friends into battle against the might of Ford and the corruption of the Union. Funny, touching and timeless, Made in Dagenham shows how ordinary people can do extraordinary things when they stand together.

With auditions open to the entire student body, students studying a range of subjects came together through the Performing Arts EnRICH programme to share their love of musical theatre. Making up the cast and chorus, band and technical crew, they captured the audience with catchy tunes and dance numbers including ‘Busy Women’, ‘Storm Clouds’ and

title track ‘Made in Dagenham’. Lauren Clayson delivered a compelling performance as Rita O’Grady and the same dedication to performance was reflected across the entire cast. The live musicians enhanced the storytelling on stage with their uplifting accompaniment whilst the stage crew ensured costumes, lighting, sound and set were all ready to provide a full theatre experience for the audience.

The Redwood Theatre was completed in September 2020 and has provided the College with a vibrant venue for lectures, RICHTalks, rehearsals and concerts. The pandemic has meant whilst the space has been used to host a variety of events (from live streamed music concerts to the filming of local primary school theatre productions) it has been unable to open its doors to the public for a large-scale production of this kind until now.

The pandemic was not the only obstacle the show faced as Storm Eunice cascaded across the South-West, forcing the College to postpone the final performance by 24 hours at short notice in the interest of health and safety. The performers all adapted to the challenge, remaining pumped up to produce a phenomenal final show on the Saturday night that despite the date change saw the theatre remain practically sold out.

Director and Course Manager for Vocational Drama, Gemma Thompson, commented ‘I am so proud of all our students! This has been a complicated and challenging year for all involved for obvious reasons. The students have worked hard to catch up with any missed rehearsals due to Covid and have been enthusiastic and full of energy in such uncertain times. They have really loved being a part of live theatre again and we have all loved teaching them. This is a brilliant show which retells the story of some amazing women from UK history who paved the way for equal pay. It has been a great experience learning about this pivotal moment and the students have done it justice”.

Some of the feedback received from the audience:

“Amazing commitment! I can’t wait to see it again”.

“Brilliant. Well done to everyone. What a show!!! You should all be very proud of yourselves”.

“Wow! What an amazing show! Thank you everyone involved for giving us an entertaining and emotional night out”.

“It was genuinely brilliant. Thank you all for your hard work – it definitely paid off”.

“Can I say what an outstanding evening’s entertainment” – David Griffin, Chair of Governors at Richard Huish College.

“I congratulate you for a fabulous performance of Made in Dagenham – it was just brilliant. My husband Paul used to assist in the Brewhouse and the Edinburgh Festival and just loved the show, he said how professional it was and showcased everyone’s acting and musical talents which are just astonishing. We came home on a high and are still buzzing. Congratulations to all the staff and students who took part”. – Mary Tighe, Former Richard Huish College Governor.